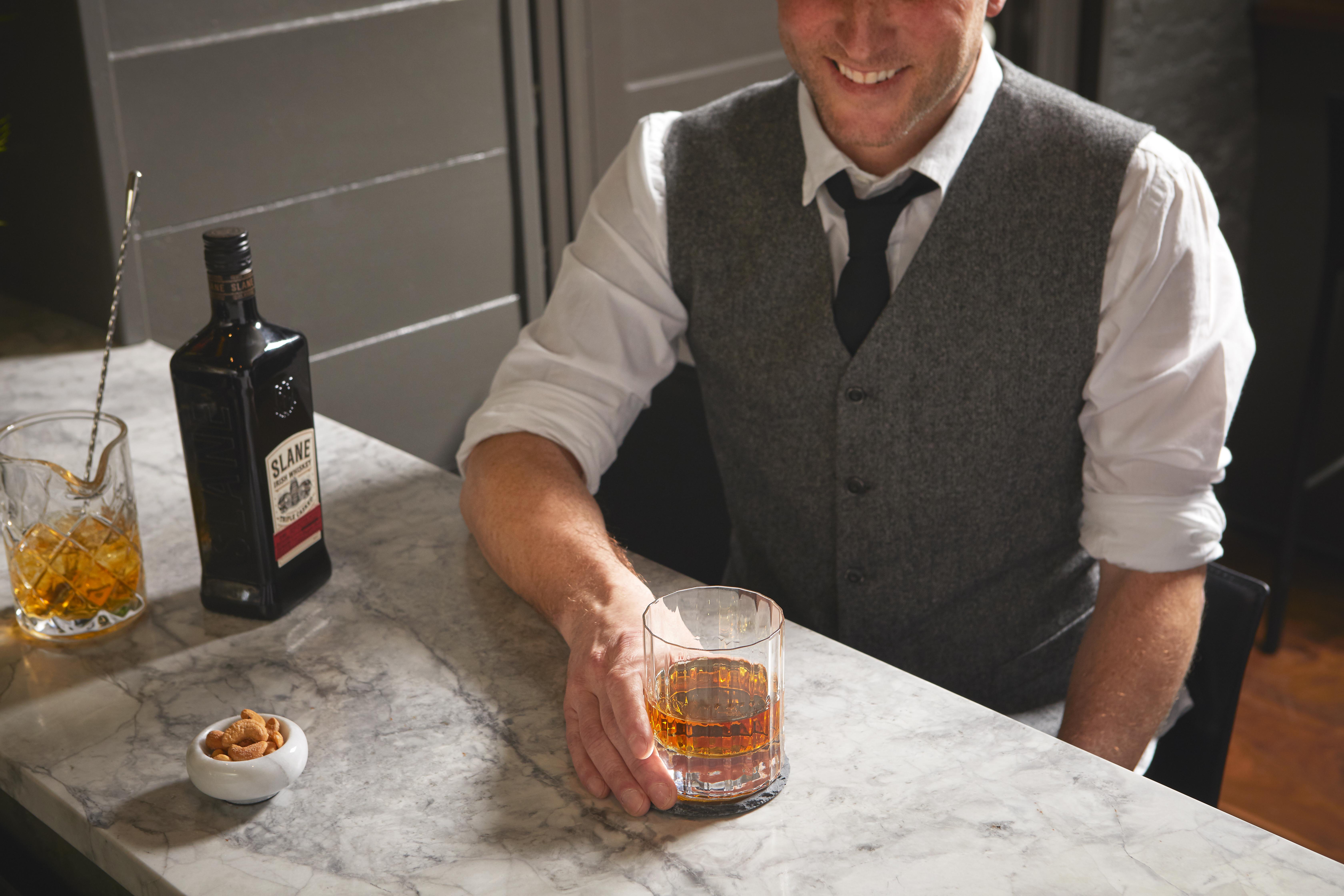 It begins with high quality, mature Irish grain and malt whiskey that is then aged in three different cask types: virgin American oak, seasoned oak, as well as Oloroso Sherry casks from Spain. Each cask imparts its own flavour profile: virgin oak lends toasted oak, vanilla and chocolate notes; seasoned oak, that formerly held American whiskey, infuses flavours of caramel, plum, butterscotch and banana; while Oloroso Sherry casks from Spain deliver notes of raisin, spice and tree nuts. Once carefully blended, the result of this triple-casked process is a bold yet smooth spirit with unique complexity and a more robust flavour than traditional blended Irish whiskeys.

Slane Irish Whiskey is a collaboration between two historic families – the Brown family of Brown-Forman in Kentucky, a leader in whiskey since 1870, and the Conyngham family of Slane Castle in Ireland. Co-founder and brand ambassador, Alex Conyngham works in conjunction with the savvy team of whiskey distillers who represent more than 60 years of whiskey-making expertise.

“We set out to deliver a new take on Irish whiskey, one that respects the traditional style but at the same time excites us about where it can go,” says Alex Conyngham, co-founder and brand ambassador of Slane Irish Whiskey. “We’re fortunate to source our virgin American oak and seasoned oak casks from Brown-Forman’s own cooperage. It’s fantastic as the triple-casked layers create this incredibly satisfying complexity for Slane Irish Whiskey and we’re very proud of what we’ve created.”

The whiskey’s new home is the state-of-the-art Slane Distillery, built into the renovated 250-year-old gothic horse stables of Slane Castle. Set amongst 1,500 acres of the Boyne Valley, it’s a picture-perfect backdrop for  a new expression of Irish whiskey.

“It’s a terrific tale of two families who share similar values joining to create a lasting legacy for Irish whiskey,” says Conyngham. “The whiskey is a nod to Slane, right down to the striking black bottle that evokes the symmetry of Slane Castle.”

The name ‘Slane’ is familiar to rock ‘n roll fans the world over. Since Henry Conyngham launched the Slane Castle Concert series in 1981, it has attracted more than one million rock ‘n roll fans who flock annually to the estate’s idyllic grounds.

Slane Irish Whiskey (40% ABV) is available in Australia from September 2017. Currently, it is only available in Ireland, limited states in the USA and the UK. To pre-order, contact your Brown-Forman rep.